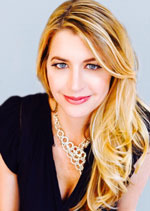 Jamie Anderson was recognized as “The New Female Director to Watch Out For in 2020” by Viva Glam Magazine, and “Top 25 Writers to Watch in 2018” by The International Screenwriters’ Association. She has written, directed, and produced three short films that have all won awards, including Best Director for Punching Bag, Best Dark Comedy for I’m F%$#ing Fine, and Best Dark Comedy for Me Too Nice, which was selected for eighteen festivals in 2020. She directed English romantic comedy, I Won’t Say I Love You, in the UK, to acclaim, winning Best Romantic Short, Best Romance, and Best Actress. Most recently, Jamie wrote, directed, and produced her comedy pilot, Pumas, in Los Angeles, safely during the pandemic. Next, she will direct romantic feature film, Summer in Rome, with Simon Fawcett producing, which she co-wrote, in Italy. Subsequently, she is slated to direct her comedy feature film, Pregnant in Las Vegas, for Patriot Pictures, in 2021.

Jamie Anderson is a writer, director, filmmaker, and actress, living in Los Angeles. Having grown up in Mississippi and Florida, her work is inspired by the paradox of the Redneck Riviera, as well as her life in Hollywood, both of which are a wealth of material that guarantees she’ll never run out of something to write about. At times with crass humor, she has a knack for turning the painful into the absurd, always with depth and heart.

After an acting career in film and television, Jamie was mentored as a writer by some of the best comedic voices working today. The first sitcom pilot she wrote garnered such acclaim that it led to her first feature option to Radar Pictures. Her next comedy pilot, “Pushing 40”, now titled “Pumas”, was a top five finalist in the prestigious TrackingB script competition. She followed it up with the feature You Be You, a family dramedy set in the Deep South, which won her a fellowship to the esteemed Rocaberti Writers Retreat in Barcelona, Spain.

Currently, Jamie has a period feature in development at Broken Road Productions, a comedy television pilot in development with an acclaimed showrunner attached, and a female-driven comedy feature in pre-production at Patriot Pictures.